The world’s two largest cryptocurrencies – Bitcoin and Ether – have been closely following each other in the recent market fall. Over the last few years, market analysts have been arguing that Ether has been outperforming Bitcoin for a while.

However, on-chain data suggests that Bitcoin has performed relatively better than Ethereum, especially during the bear market. In the short term, the monthly return profiles for BTC and ETH have been underwhelming.

As per data from Glassnode, Bitcoin gave a negative 30% return over the short term meaning it corrected by 1% on average on a daily basis. This negative return is quite similar to the previous bear market cycles for Bitcoin.

On the other hand, the monthly return profile shows Ethereum gave a relatively poorer performance of -34.9%. It also shows that the performance correlation between these two assets remains relatively strong.

Let’s take a long-term view of the performance of these assets in a typical 4-year bull/bear cycle. Both BTC and ETH have given diminishing returns over the long term. Bitcoin’s CAGR has declined from 200%+ in 2015, to less than 50% today.

ETH has generally outperformed BTC during bullish trends, however, these divergences do appear to be getting weaker over time (lower upwards divergences). In more bearish trends, it can be seen that the ETH CAGR often tends to underperform BTC. 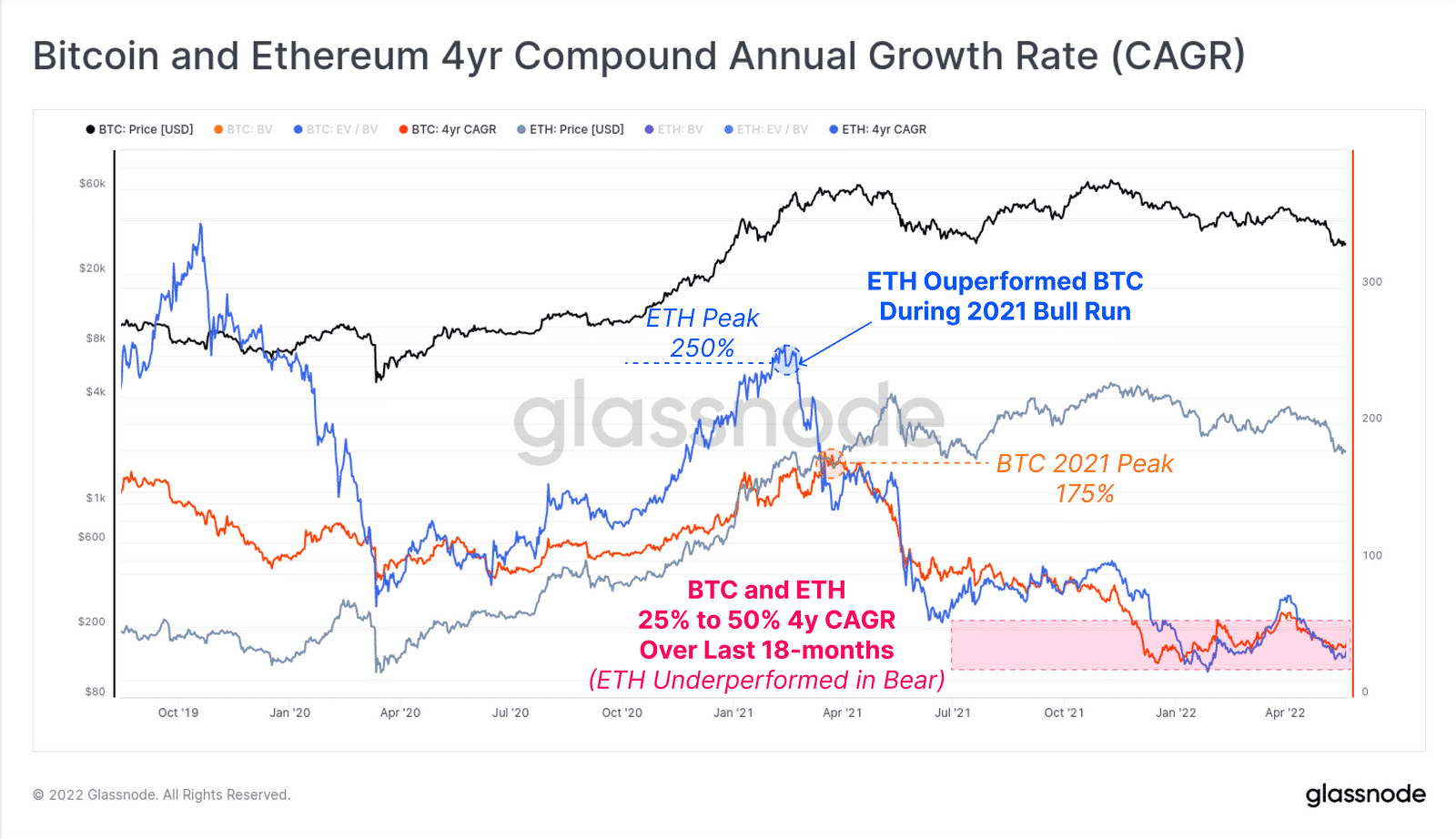 The typical characteristic observed is that during the early-mid stage bull markets, BTC dominance declines as investors seek exposure to other risky altcoins for better rewards. However, in an earlier stage bear market, the risk appetite declines substantially and money moves back to safer assets such as Bitcoin.

Bhushan is a FinTech enthusiast and holds a good flair in understanding financial markets. His interest in economics and finance draw his attention towards the new emerging Blockchain Technology and Cryptocurrency markets. He is continuously in a learning process and keeps himself motivated by sharing his acquired knowledge. In free time he reads thriller fictions novels and sometimes explore his culinary skills.

The presented content may include the personal opinion of the author and is subject to market condition. Do your market research before investing in cryptocurrencies. The author or the publication does not hold any responsibility for your personal financial loss.

How NFTs Are Changing Esports

How NFTs Are Changing Esports

Move over grilled cheese, my Vegan Spinach Cheese Melts are here to curb even the most serious cravings for a...