Behind zkLend, a dual solution money market protocol for institutions and retail

👋 Want to work with us? CCPR is hiring for a handful of positions!

zkLend is an L2 money-market protocol built on StarkNet, combining the best of zk-rollups and Ethereum to bring more users to the DeFi market.

To differentiate itself from the growing competition on the market, zkLend offers an innovative, dual solution to the problems faced in DeFi—a permissioned and compliance-focused solution for institutional clients and a permissionless service for DeFi users. All without sacrificing decentralization.

zkLend was created to advance DeFi adoption by making financial primitives on the blockchain accessible to the retail market and the growing number of institutional clients. And while it sounds like a simple enough proposition, the protocol was faced with a series of complex problems it needed to solve—the first one being security.

The team behind zkLend started toying with building a protocol in 2021 when talks of Layer-2 solutions emerged. While Ethereum was and still is one of the best blockchain platforms to launch on, both in terms of the overall security and network effect, the congestion and high fees it faced at the time pushed the team to consider launching on an L2.

When Vitalik Buterin’s guide to rollups was published in early May last year, it cemented the team’s position that zk-rollups were the best L2 solution for zkLend. With computations done off the main blockchain while proofing the results and state-root changes recorded on-chain, zk-rollups provided scale without compromising security.

At the time, StarkNet emerged as a promising new application of zk-rollup technology, pushing the team to launch the protocol on the innovative blockchain.

The team said that StarkWare’s technological competitiveness, proven effectiveness, and a technical, developer-focused ecosystem made it choose the network. StarkNet uses cryptography based on STARKs validity proofs—around ten times faster than its competitor SNARKs (technology currently used by zkSync).

StarkNet’s scaling capability was not theoretical but supported by the actual performance of StarkEx – a predecessor dapp-specific scaling engine developed by StarkWare, which processed over $200 billion worth of trades in 2021. As of May this year, this number has passed $600 billion.

“We saw a scrappy and robust developer ecosystem where people had new protocol ideas that didn’t exist on L1. We wanted to be at the forefront of innovation,” Brian Fu, the co-founder of zkLend told CCPR. ”And now In less than six months, we went from being a part of a nascent community to one that has massively expanded across games, DeFi, and infrastructure tooling. ”

Building on StarkNet was also zkLend’s attempt to future-proof its protocol. StarkNet’s recently updated roadmap includes working on a Layer-3 solution for private zk-rollup layering, enabling developers to have both public and private L3s on top of the L2, further increasing its privacy zk-rollup solution. 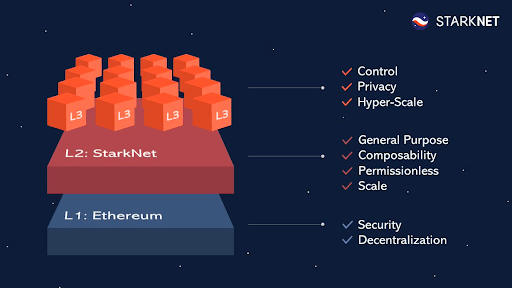 A dual solution, tailor-made to solve the problems of DeFi adoption

zkLend has gone to great lengths to establish a rock-solid foundation for its protocol. However, the team isn’t blind to the challenges ahead of them—the biggest one being growing competition from already established protocols on other networks.

StarkNet’s recent push to become the go-to gaming and NFT L2 has also positioned zkLend as a backbone of the network, providing financial infrastructure to thousands of new users pouring into the sectors. Even Aave, by far the biggest lending protocol currently on the market, has announced plans to come onto StarkNet.

zkLend plans to leverage everything StarkNet has to offer to become the flagship lending protocol on the network and a household name in DeFi. The network’s low transaction costs will enable it to create more efficient liquidation models, putting the focus back on the borrower.

The team cited its KYC and whitelisting layer, market pool risk isolation, two-sided collateralization, borrowing factor, and a dynamic correlation-linked collateralization ratio as product features that differentiate the protocol from others.

And while these features aren’t anything new on the market, they create a perfect environment for what zkLend is genuinely about—Artemis and Apollo.

Artemis and Apollo are the protocol’s dual approaches to tackling the growing size of the DeFi market.

Instead, zkLend decided to implement the dual approach—creating two sister protocols catering to a specific audience. The protocols are operationally independent but are designed to leverage one another in the future to maximize capital efficiency.

Artemis is zkLend’s retail-oriented product, a permissionless protocol open and accessible to anyone. The team expects to have an MVP in early July, but V1 of Artemis won’t launch until the end of Q3. The full version of the product will have features including flash loans, asset tiering, a refined token utility program, and other protocol integrations.

The second version of the protocol will be available at the end of Q4 and include adaptive interest rates, long-tailed assets, and free swaps. Aside from these features, V2 will bring about the start of the DAO transition for Artemis, scheduled to be completed next year.

On the other hand, Apollo is tailor-made to fit the needs of institutional clients entering DeFi. Unlike Artemis, Apollo is a permissioned network, offering customizable and transparent permission rights for vetted participants.

What makes Apollo a perfect fit for institutions is its focus on compliance. The product has a compliance layer that’s unheard of in the world of DeFi, but a standard feature in TradFi markets. It offers stringent regulatory compliance, as well as KYB and KYC checks.

An MVP for Apollo is set to be released at the end of the year. The team is working on securing institutional launch partners and an on-chain KYB provider in parallel to the product development.

While the team didn’t reveal any further details about who those partners might be, they did say that various institutions and investors were included in talks about what the over-and under-collateralized lending products on Apollo should look like.

“We are already beginning to see an influx of traditional players, but they still tend to be crypto-savvy investment funds and prop trading firms,” Fu explained. “Plus, the TVL involved is still small as they test the waters. Success cases like Clearpool, Goldfinch, and Maple set the tone for the market. As more of these use cases come out, institutions will become more comfortable around DeFi and speed up the rate of adoption.”

When it comes to launch dates, zkLend has a clear schedule in place but remains tied to StarkNet’s timing.

“Our public launch is dependent on the StarkNet public mainnet launch, but we’re optimistic about the timing,” Jane Ma, the co-founder and project lead at zkLend said. “By launching alongside a few other protocols including DEXes and DeFi aggregators, we plan to create more use cases and greater composability for StarkNet users “

This is why the protocol’s native token, ZEND, still doesn’t have a set launch date. The token was designed to anchor the zkLend protocol, incentivize activity, award genuine contributors to the network, and give meaningful governance rights to its holders.

The $5 million seed round zkLend raised recently will be enough to cover the protocol’s development for the foreseeable future. Led by Delphi Digital, the round saw key cornerstone investments from StarkWare, Three Arrows Capital, and Alameda Research, among other big names in the VC industry.

The team said they don’t have plans for more fundraises, but they’re leaving options open if the situation calls for it.

“At the moment our top priority is to get our MVP product out to market at the end of Q3 2022, as well as the full-pledged product onto StarkNet mainnet by early Q4 2022,” Ma told CCPR. “We want to realize the roadmap we have set and demonstrate the value of our product to current investors and users first.”

Dal Makhani is a North Indian “dhaba” style dish of creamy lentils flavored with butter and garnished with cream. My...